Why Your Teen Should Join Marching Band 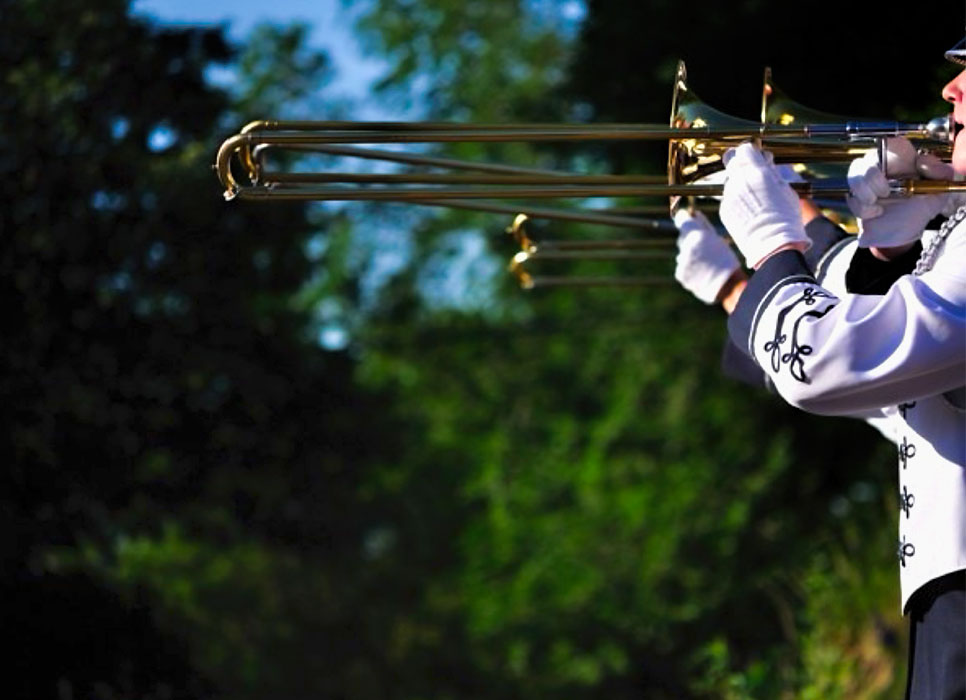 I never had any illusions that my kids were going to be “cool” or “popular;” I’ve met their parents, and… yeah, the deck was stacked against them from the beginning. Plus I’m a firm believer in the notion of doing what you love, surrounding yourself with a few trusted compadres, and not worrying about the rest of it. This means I shouldn’t have been surprised when marching band first took over our lives and brought along so many fantastic benefits, but I never claimed to be all that swift on the uptake.

If you’re hesitating—or if your teenager is hesitating—don’t. Trust me, marching band is not just the dorky kids in terrible uniforms. I mean, yes, it is dorky kids in terrible uniforms, but it is also so much more than that, and it’s wonderful. (Plus, hey, it turns  out many of those dorky kids are hilarious, and/or brilliant, and/or they transform into self-assured young adults over time. And I am not just saying that because I adore my own geeklings; it’s totally true.) Let me take you through the magic that is high school marching band.
The uniforms are terrible. As already acknowledged, no one on the planet looks good in a marching uniform. This is not a bad thing. While the cheerleaders are making sure their high ponytails are just so, the girls in the band are simply stuffing their hair into their shakos (yes, the dorky hats have a special name) and forgetting about it. You know who looks stupid in a marching band uniform? That awkward, pimply kid who snorts when he laughs. You know who else looks stupid in a marching band uniform? The drum-playing Ashton Kutcher lookalike all the girls are giggling over. Everyone.
Stupid uniforms are the great unifier. The playing field is completely level (pun intended) for the band kids on the fraught topic of looks, and this can be a real relief for kids who are constantly worrying if they measure up.

Those terrible uniforms are dry-clean only. In the recent past I’ve have two different friends with sports-playing teens send me pictures of giant mountains of laundry and encroaching piles of smelly pads and other equipment, lamenting the stench and work that is being a sports parent. We have none of that. The uniforms get sent out for cleaning, and for most of the season here in the south, the kids are wearing as little as possible under said uniforms, because it’s a bazillion degrees outside. No laundry monsters for us! (Just, uh, resist the urge to sniff their marching shoes. You’re welcome. Sprinkle some baking soda in them periodically and stay back.)

Marching band directors are saints among us. Any high school that has a marching band worth its salt is run by a band director anchored by four guiding principles:
A love of music.
A love of teenagers.
Expectation of complete dedication.
Zero tolerance for shenanigans.

I know this is true in our band, and in talking with other band families, we’ve all concluded it’s universally true, because there is no other way a high school music teacher can turn a hundred-odd hormone-addled adolescents into a well-oiled production machine. The marching band director will push your child to excellence in a way that settles for nothing less, but somehow he’ll do it in a way that your kid will love. (Don’t ask me how. I can’t even get this kid to pick up her socks off the floor, so clearly the band director possesses superpowers.) The work that gets done on the field is amazing enough, but it doesn’t end there—this extra set of watchful eyes brooks no transgressions elsewhere, either. There is a code of conduct and it is taken very seriously. Which leads us to…

… Band kids are the best kids, period. In a lifetime of observing different groups and activities where teens congregate, I can say without reservation that the marching band is absolutely the least homogenous, in the sense that there are kids from every part of the school and all different circumstances. Other activities tend to bring like kids together, and somehow band is different. This will put your kid with some kids they’d never meet, otherwise. But the way in which they’re all alike is that they’re all really good kids. They work hard in school, they work hard in band, and remember how the director doesn’t tolerate shenanigans? They meet that code of conduct or they
disappear. That’s it. There’s no nudge-nudge-wink-wink or “I didn’t see that” in band culture the way there is in some team sports. The kids are expected to be awesome at all times. As a result, most of the kids are awesome at all times. No, they don’t stop being teenagers, but there is a family atmosphere and acceptance of all among the band kids that I’ve yet to see anywhere else. It’s a safe place, and I don’t know about your teen, but for my teen, that’s been a godsend.

Musicians do better at everything. Okay, maybe not everything, but the benefits of music education are well-documented. Being in marching band gives your teen everything from a leg up on the SATs to a decreased chance of using drugs. Trust me, band kids don’t have time for any of that, anyway. Ever heard the saying that a busy teenager is a happy teenager? Band kids are busy.

Marching band is great exercise for the exercise-averse. We’re not a family of   obese couch potatoes, but neither are we particularly sporty and outdoorsy. I don’t know if you know this, but marching around in 100+ degree weather is really, really hard. It requires a great deal of physical stamina, and it’s often requiring it of kids who would rather chew off their own arms than run laps. Know what’s awesome? The fact that they’re concentrating on their music totally distracts those kids from the fact that they’re getting a workout.

The marching band usually gets to go on awesome trips. Sure, other teams get to travel, too, but our band has gone to some amazing places and events, and then they’re there with this take-no-crap band director and a group of good kids, which means peace of mind.

Two words: Band Camp. The greatness that is the periodic, dead-serious interjection of, “This one time? At Band Camp?” into everyday conversation cannot be overstated. Or maybe that’s just our family, but really, it never stops being funny.